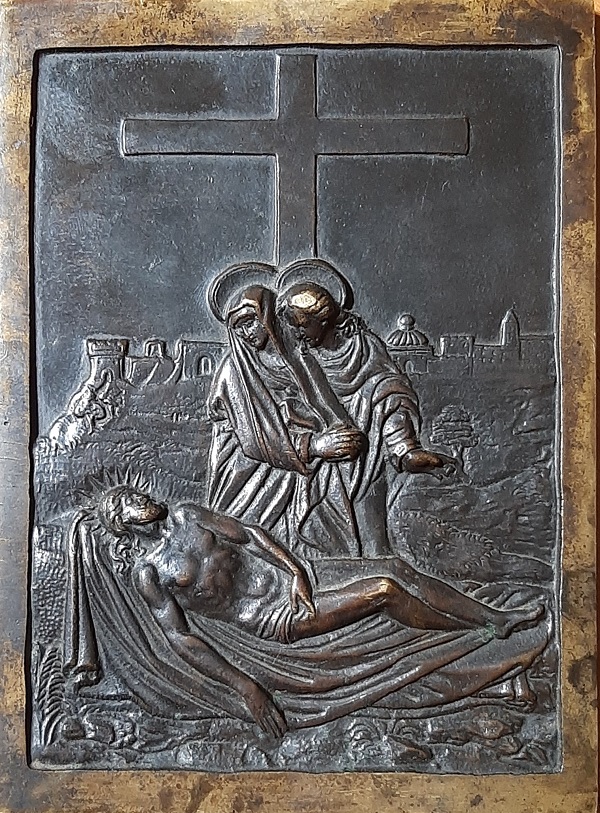 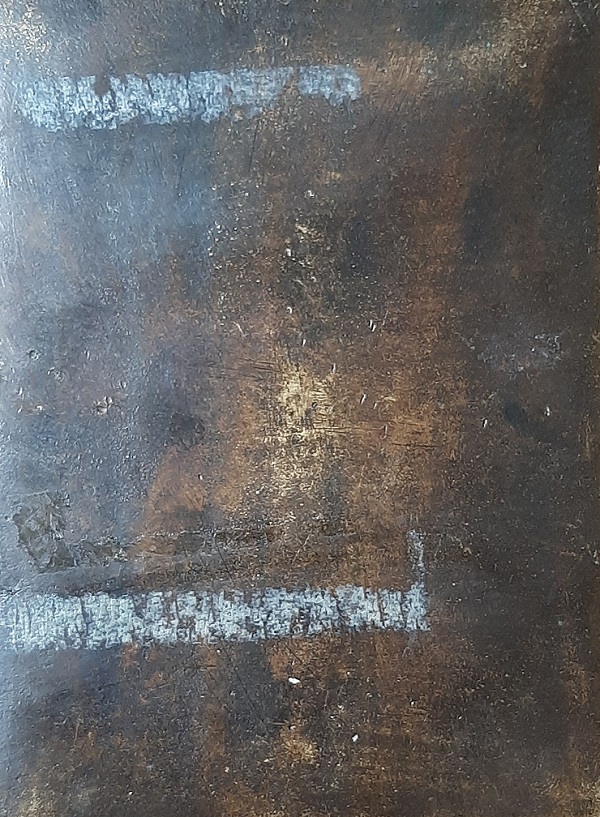 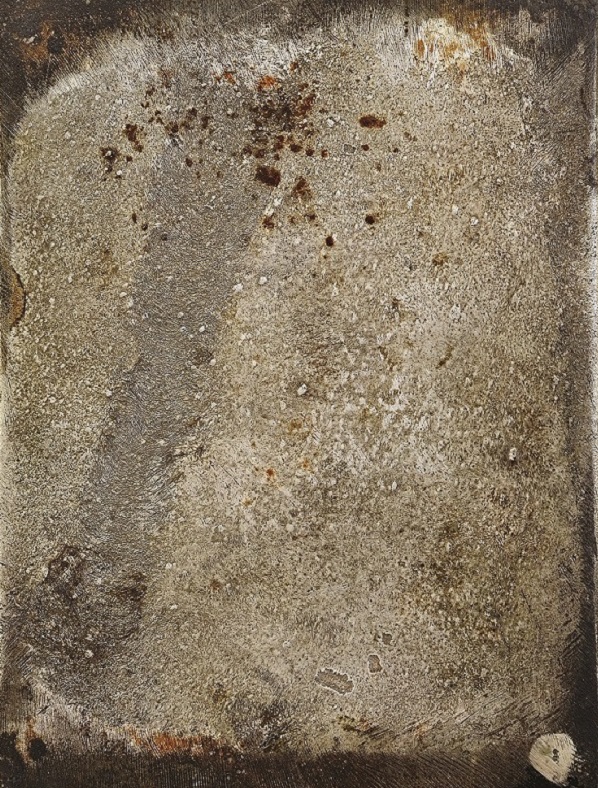 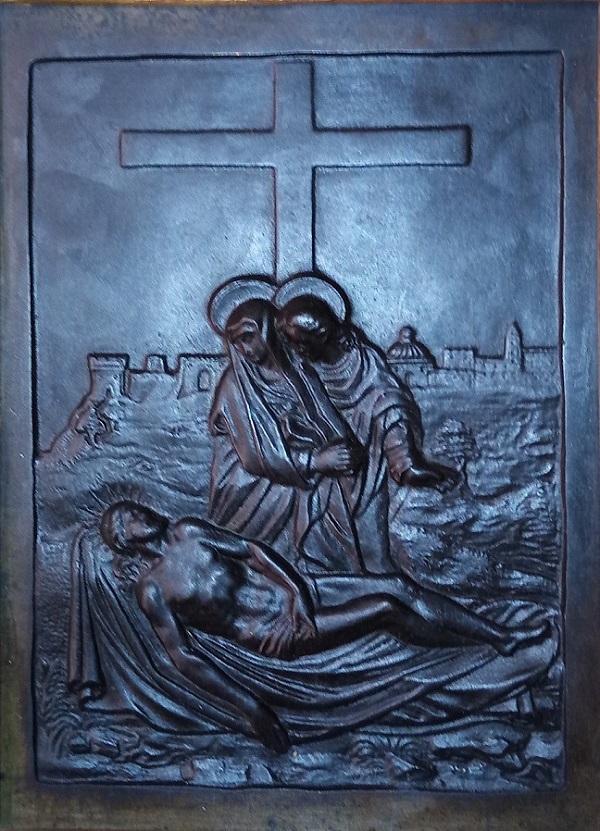 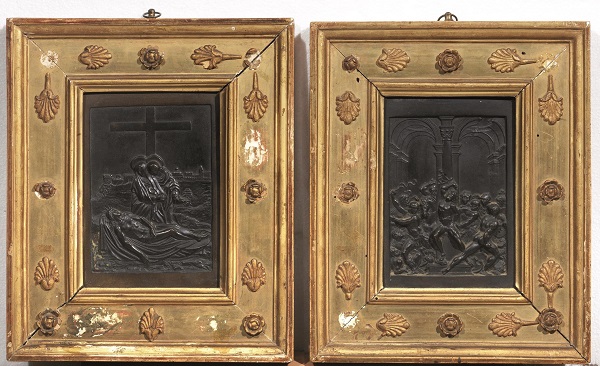 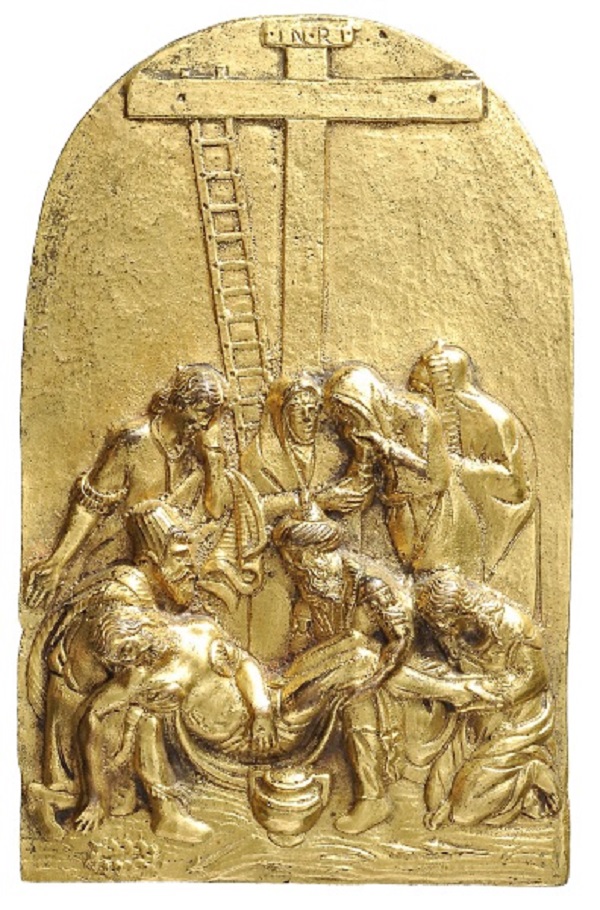 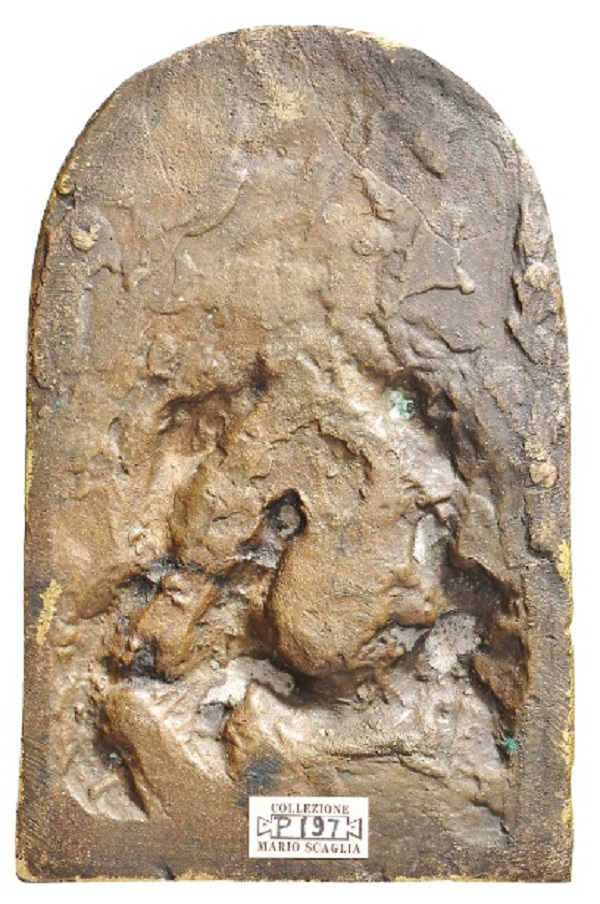 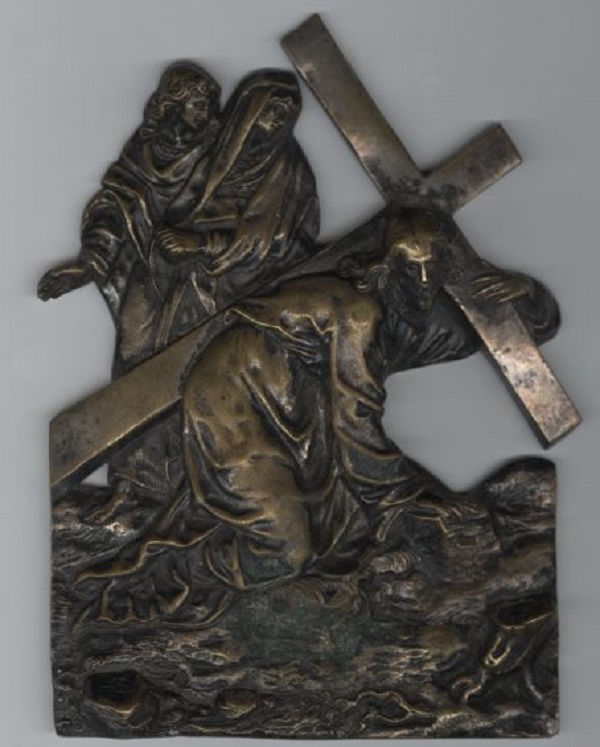 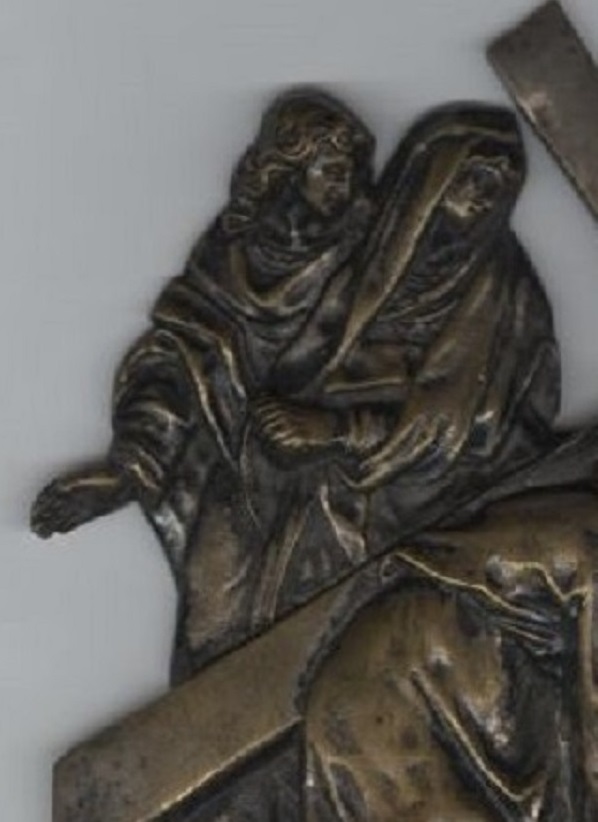 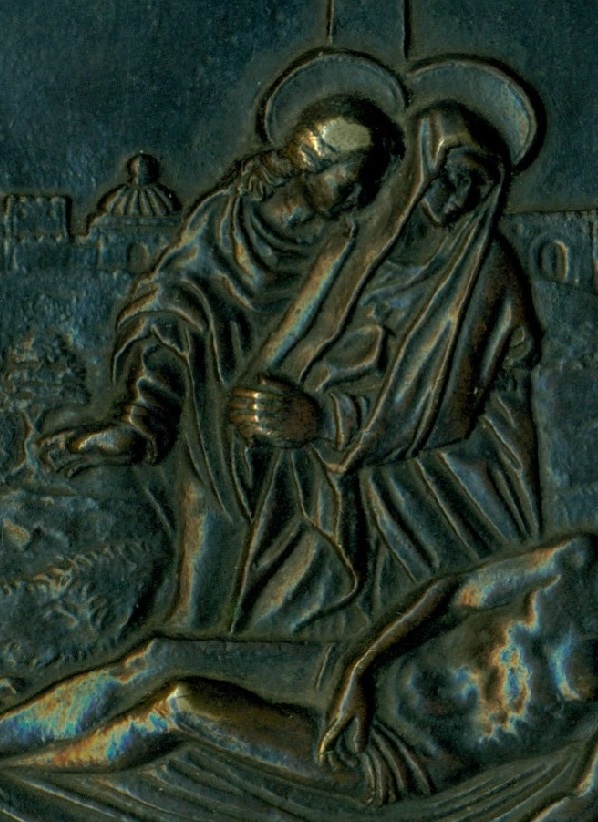 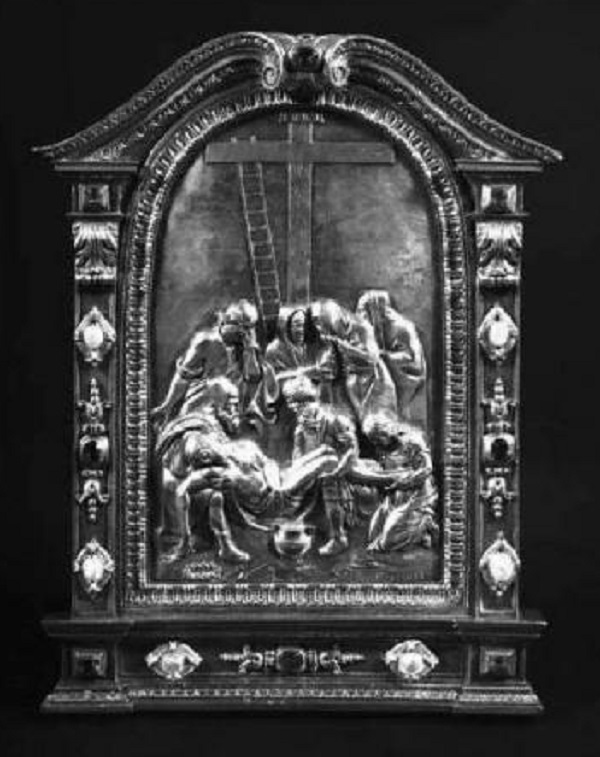 I have been studying this bronze plaquette [Fig. 1] for years without being able to determine its exact age and origin, nor to hypothesize which iconographic sources the author may have been inspired by (note 1).

Christ is placed on a sheet with his legs crossed and his arms abandoned along the body; the head is surrounded by a rayed halo. The very close figures of the Mourners, Mary and John loom over him; it seems to see that Maria intertwines her hands, moving them to her left (note 2). Behind them stands a “metaphysical” Cross that recalls the one that appears in some plaques of the Pietà attributed to Jacopo and / or Ludovico del Duca (note 3); finally, in the background, you can see a fortress, an ancient arch, a dome, walls and a bell tower that represent an unidentifiable ideal city.
I will resume the discussion both because, in the meantime, a small novelty has emerged, and because I always hope that some useful information may arise from the public of visitors, in this extended case, thanks to an English translation.
At the time I had discussed it with Mike Riddick, a scholar and expert in Renaissance bronzes whose site www.renbronze.com  we never miss an opportunity to recommend.
Here is what Riddick wrote in summary in 2015 (personal communications via e-mail): only four other examples of this plaquette are known and the one under discussion is probably the oldest version; the known plaquettes are all found in private collections, in some cases after passing through the auction market and it does not appear that any museum possesses an example.
The first is judged to be a later casting, made, unlike the others, in a light-colored alloy [Fig. 2].

The others, the images of which we do not show due to their poor quality, all very similar to that of Fig. 1, come respectively from an auction of 9-10 June 1997 no. 2066 of an unidentified auction house, there classified as Italian of the sixteenth century, by the Bonhams auction of 9 December 2009, no. 144 (16.5 x 12 cm), there classified as Spanish of the seventeenth century and from the Wannenes auction, March 3, 2015 no. 24 (formerly the Vivioli Collection).
Riddick agrees on theage, ie the end of the sixteenth century, and on the fact that the plaquette may be Italian with possible Flemish influences.
To this small catalog are added two plaquettes both appeared on the antiques market: the first in 2018 [Fig. 3], the second in 2019 in pendant with a famous plaquette due to the Moderno (note 4), both inside nineteenth-century frames in golden tablet. The “couple” was offered at auction in 2017 at Poggio Bracciolini as the result of a nineteenth-century merger [Fig. 4].

I am unable to assess whether the plaques in Fig. 4 are actually nineteenth-century or not – I trust the experience of the managers of the Poggio Bracciolini auction house.
Surely the examples of the Lamentation in question are in no way attributable to the Modern for which the “couple” was composed for what were considered stylistic affinities – to which the framing may also have contributed – completing the work by inserting them in the same type of golden frame.
We then tried to find some comparisons for our Lamentation in other plaquettes.
The one that comes closest is a plaquette attributed to Giovanni Battista Scultori (1503-1575) [Fig. 5, note 5]. However, apart from the same subject and Giovanni’s position with his arm stretched back, it does not seem to recognize any affinity either on a stylistic or executive level.

The “novelty” I alluded to at the beginning is the discovery of a plaquette – which would perhaps be more correct to define a relief – at a Californian museum [Fig. 6].

Although on the other hand, the group consisting of Mary and John is very similar to that of the plaquette of Fig. 1 [Fig. 1a and 6a].

Unfortunately, this news does not make us progress much in research because the Santa Barbara museum, while confirming a dating to the second half of the sixteenth century, does not venture hypotheses about the geographical area of ​​origin or the possible author (“artist unkniwn”).The fact that the pair of figures juxtaposed is in counterpart may suggest that one of the two was taken from an engraving in which the other was previously translated.

[1] On the back a handwritten label with twentieth-century writing had been applied, now removed, which read: “Northeastern Italy / second half of the sixteenth century. / cf: Imbert pl. VI 2 / – Finarte Auction 909 / October 94 n. 57 / evaluation 1,8-2,4 ”, written that turned out to be misleading. The writing reproduces the caption of the Finarte catalog, but neither lot 57 nor the specimen already in the Imbert Collection correspond to the plaque in question. On the Imbert antiquarian you can read the articles Eugenio Imbert collector and antiquarian (February 2021) [Read] and Eugenio Imbert collector and antiquarian. The photographers (May 2021) [Read].

[2] The gesture recalls the famous Pietà by Sebastiano del Piombo for the church of San Francesco in Viterbo and now at the Civic Museum in Viterbo (palazzo dei Priori), from an idea developed by Michelangelo – used for the Rachel of the tomb of Julius II in Rome – that the same Michelangelo seems to have borrowed from the 15th-century Emilian “Compianti”. We find this gesture variously interpreted, in many representations, but here I would like to mention two sculptures by Orazio Marinali, a Pietà (1687-89) for the church of San Vincenzo in Vicenza (1687-89) and an Addolorata (1708) for the church of the Margheritoni of Arcugnano (Vi).

[3] Please refer to the article Michelangelo’s Pieta in Bronze (November 2016) [Read] and the others mentioned therein.

[5] The attribution is due to Francesco Rossi, according to whom the plaquette is obtained from a silver relief commissioned in 1562 to Giovanni Battista Scultori by Ippolito Capilupi, bishop of Fano and Apostolic Nuncio in Venice, inserted in a frame commissioned by Duke Guglielmo Gonzaga by 1562, part of the Treasury of the Basilica of Santa Barbara in Mantua and since 1983 kept in the local Diocesan Museum [Fig. A] (Rossi Francesco, La collezione Mario Scaglia. Placchette, Lubrina, Bergamo 2011, p. 383-384, ill. X.20 p197 tav. LXXV.